To the attention of the Editors: You can watch a trailer for Turning Red here and a video of the characters coming to life on our aircraft here.

MONTREAL, Feb. 8, 2022 /CNW Telbec/ - Air Canada has today unveiled an aircraft with a themed livery and other surprises for its customers in celebration of the highly anticipated release of Disney and Pixar's Turning Red, an animated film that is set in Toronto and directed by Academy Award™ winner and Canadian Domee Shi. 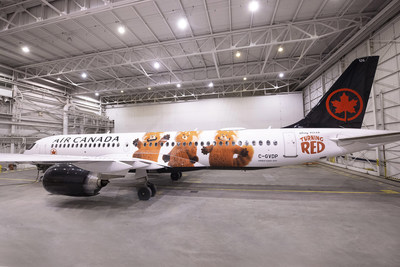 "As Canada's largest airline and the country's flag carrier, our collaboration with Disney and Pixar for Turning Red, directed by award-winning Canadian filmmaker Domee Shi is a wonderful opportunity to showcase Canadian talent and bring the best of Canada to the world," said Andy Shibata, Vice-President, Brand at Air Canada. "We wanted customers of all ages to be able to enjoy the special livery and be a part of the excitement around this very special Canadian moment."

"I'm absolutely stoked about this collaboration with Air Canada," said Domee Shi. "I made Turning Red a love letter to Toronto and everything Canadian, and now to see the film celebrated on the airline that literally brought my family and me over from China when I was little is especially meaningful to me. I cannot wait for Canadian audiences and people around the world to see the film, and hopefully fall in love with Canada just like I have."

"We are very proud of this unique collaboration with Air Canada and it shows how important this film is to our country," said Quincy Kelman, Vice-President of Marketing, Walt Disney Studios Canada. "Together we are able to transcend this film beyond the screen.  Turning Red is set in Canada, directed by a Canadian and will be treasured by Canadians for years to come."

Disney and Pixar's Turning Red introduces Meilin Lee, a confident, dorky 13-year-old torn between staying her mother's dutiful daughter and the chaos of adolescence. Her protective, if not slightly overbearing mother, Ming, is never far from her daughter—an unfortunate reality for the teenager. And as if changes to her interests, relationships and body weren't enough, whenever she gets too excited (which is practically ALWAYS), she "poofs" into a giant red panda! Turning Red will premiere exclusively on Disney+ across Canada on March 11, 2022.

Air Canada will be promoting the film through a themed livery that will fly across the country on a Canadian built Airbus A220. You can watch a video of the characters coming to life on our aircraft here.

The airline is also launching Air Canada's Contest Celebrating the Release of Disney and Pixar's Turning Red, offering five prize packages, each featuring a trip for four people to Toronto to attend the Canadian premiere special event of the film on March 8. The contest begins today and runs until February 20 for residents of Canada. To enter the contest, please visit https://www.aircanada.com/ca/en/aco/home/book/special-offers/disneypixar.html.

Starting this month, passengers onboard Air Canada aircraft will enjoy a special Turning Red­ video, inspired by the film's trailer. On select aircraft, passengers can discover director Domee Shi's favourite places in Toronto by exploring Air Canada's seatback city guide, and on aircraft destined for Toronto, an animated landscape of the city will be featured on seatback screens as passengers board.

Next month, the March issue of Air Canada enRoute magazine will feature a custom-illustrated cover of Toronto with Meilin Lee as the panda gazing across the city, as well as a feature interview with director Domee Shi.

About Air Canada
Air Canada is Canada's largest domestic and international airline, the country's flag carrier and a founding member of Star Alliance, the world's most comprehensive air transportation network. Air Canada is the only international network carrier in North America to receive a Four-Star ranking from the independent U.K. research firm Skytrax, which in 2021 also named Air Canada as having the Best Airline Staff in North America, Best Airline Staff in Canada, Best Business Class Lounge in North America, as well as an Excellence award for its handling of COVID-19. Also in 2021, Air Canada was named Global Traveler's Best Airline in North America for the third straight year. In January 2021, Air Canada received APEX's Diamond Status Certification for the Air Canada CleanCare+ biosafety program for managing COVID-19, the only airline in Canada to attain the highest APEX ranking. Air Canada has also committed to a net zero emissions goal from all global operations by 2050. For more information, please visit: aircanada.com/media, follow Air Canada on Twitter and LinkedIn, and join Air Canada on Facebook.

About Disney+
Disney+ is the dedicated streaming home for movies and shows from Disney, Pixar, Marvel, Star Wars, and National Geographic, as well as the general entertainment content brand in Canada and other select international markets, Star. As part of Disney's Media and Entertainment Distribution segment, Disney+ is available on most internet-connected devices and offers commercial-free programming with a variety of original feature-length films, documentaries, live-action and animated series, and short-form content. Alongside unprecedented access to Disney's incredible library of film and television entertainment, the service is also the exclusive streaming home for the latest releases from The Walt Disney Studios.  For more, visit disneyplus.com, or find the Disney+ app on most mobile and connected TV devices.