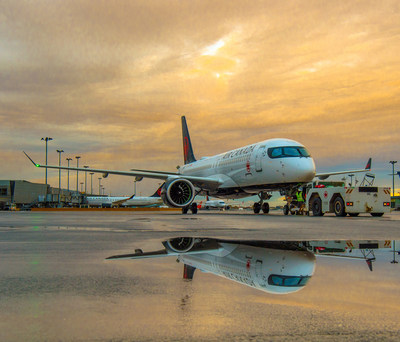 MONTREAL, Oct. 26, 2022 /CNW Telbec/ - Air Canada today announced that it has converted options for 15 Airbus A220-300 aircraft into firm orders, bringing to 60 the total number of the Canadian-built aircraft it will acquire for its fleet.

"This expanded order for the A220, built up the road from our Montreal headquarters, is an important development in the modernization of our fleet and a clear indication that we are emerging from the pandemic solidly positioned for the future. The A220 has become a mainstay of our narrowbody fleet, and its performance and passenger comfort are enabling us to compete effectively in the North American market," said Michael Rousseau, President and Chief Executive of Air Canada. "We are also proud to support the Canadian aerospace industry. This increased order will support jobs at Airbus' Mirabel factory and affirms Air Canada's positive economic impact in Montreal, Quebec and throughout Canada."

"This third re-order for the A220 in 2022 confirms the strong confidence that airlines worldwide have for this game-changing aircraft," said Benoît Schultz, CEO, Airbus Canada and Head of country Canada for Airbus. "With already over 30 aircraft in service in the country, this Canadian-designed and built aircraft has positively contributed to opening new routes as well as to making strides in reaching ambitious environmental goals for Air Canada – thanks to its unmatched efficiency."

"Today's announcement is important for our entire aviation sector. Not only will this advance Air Canada's modernization program, but it will also contribute to making the sector greener while creating good jobs for Quebecers and all Canadians. Investments like these are helping our aerospace industry grow, innovate and prosper for Canadians," said the Honourable Omar Alghabra, Minister of Transport.

"This is great news for our economy and for Canada's aerospace industry. As we cement Canada's position as the green supplier of choice for the sector, Air Canada has chosen to advance the modernization of their program for more fuel-efficient fleet using Canadian businesses and workers. This means thousands of well-paying jobs in Mirabel, Quebec and throughout the entire Canadian aerospace supply chain," said François-Philippe Champagne, Minister of Innovation, Science and Industry.

Air Canada placed its initial order for the A220, then known as the Bombardier C Series, in 2016, with a firm order for 45 aircraft and 30 options. The first A220 entered service for Air Canada in January 2020 and the airline currently operates a fleet of 31 A220s, with two more deliveries expected in 2022. Six more will be delivered in each of 2024 and 2025, with the 15 additional aircraft scheduled for delivery in 2026. All of Air Canada's A220s are built in Mirabel.

The modern and fuel-efficient A220 is playing an important role in Air Canada meeting its commitment to reach a goal of net zero emissions from all global operations by 2050. It yields a 25 per cent reduction in fuel consumption per seat, as well as a 25 per cent reduction in CO2 (carbon dioxide) emissions compared to previous generation of aircraft and NOx (nitrogen oxides) emissions that are 50 per cent below CAEP/6 standards. The A220 also delivers a 50% reduction in noise footprint than previous generation aircraft.

The development and manufacturing activities of the Airbus A220 Family are located in Mirabel, Quebec. Airbus currently provides work to more than 2,500 people at its A220 headquarters and manufacturing facilities and is expected to grow to over 3,000 people in the near future.

There are currently 6 A220s produced each month and 14 A220s are expected to be produced monthly as the programme is currently ramping up to reach its maximum production capacity in the middle of the decade.

The A220-300, which seats 137 passengers in a Business and Economy configuration, has accumulated nearly 120,000 flying hours for Air Canada since entering service. For additional facts on the A220 for Air Canada, please go here.

Photos of the Airbus A220 are available at: https://media.aircanada.com/Airbus-A220

Air Canada is Canada's largest airline, the country's flag carrier and a founding member of Star Alliance, the world's most comprehensive air transportation network. Air Canada provides scheduled passenger service directly to 50 airports in Canada, 47 in the United States and 69 internationally. It holds a Four-Star ranking from Skytrax. Air Canada's Aeroplan program is Canada's premier travel loyalty program, where members can earn or redeem points on the world's largest airline partner network of 45 airlines, plus through an extensive range of merchandise, hotel and car rental rewards. Its freight division, Air Canada Cargo, provides air freight lift and connectivity to hundreds of destinations across six continents using Air Canada's passenger flights and cargo-only flights with its fleet of Boeing 767-300 freighters. Air Canada has committed to a net zero emissions goal from all global operations by 2050.