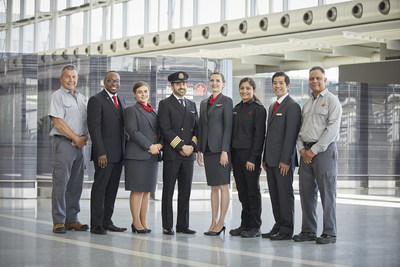 Air Canada has been named the Best Airline in North America for the fourth consecutive year by the readers of Global Traveler. (CNW Group/Air Canada)

MONTREAL, Dec. 1, 2022 /CNW Telbec/ - Air Canada has been named the Best Airline in North America for the fourth consecutive year by the readers of Global Traveler. The airline also won for Best Airline Cabin Cleanliness for the third consecutive year in the 19th edition of the GT Tested Reader Survey of the magazine's readership of frequent business and luxury travelers.

"We are thrilled to be recognized again by our loyal customers with the highly respected honours of Global Traveler's Best Airline in North America and Best Airline Cabin Cleanliness. These awards directly reflect the efforts of everyone across our airline, and of the culture we have built at Air Canada fostering teamwork, and taking care of our customers with care and class. I also want to thank our employees for their passion and dedication to serving our customers, who have entrusted us with their travel plans. They are all incredible ambassadors for Air Canada around the world," said Lucie Guillemette, Executive Vice-President and Chief Commercial Officer at Air Canada.

"Air Canada has once again shown themselves to be a leader, winning Best Airline Cabin Cleanliness for the third consecutive year and Best Airline in North America for the fourth consecutive year. As we continue to see travel increase, cabin cleanliness will be a requirement for the most savvy of passengers. This, coupled with Air Canada's win for the fourth consecutive year as Best in North America, makes for a perfect win-win for the flying public," said Francis X Gallagher, publisher & CEO, FXExpress Publications, Inc.

Global Traveler magazine conducted a survey of its readers from December 14, 2021 to September 30, 2022 with open-ended questions for the best in many categories of business & leisure luxury travel.  This survey was conducted in the magazine, as an insert to subscriber copies, as a direct mail questionnaire, online and emailed during the period in question. Only those questionnaires where more than 50% of the questions were completed were counted. Those under 50% were discarded. Employees of the magazine or individuals associated with the travel industry were not accepted.

Earlier this year, Air Canada won five honours for excellence in leisure and lifestyle travel, and the best of family travel from Global Traveler and its sister publication WhereverFamily.

These awards are the latest in a number of awards affirming Air Canada's accomplishments in key aspects of its business including product, people and employee engagement. Other major awards and recognitions recently received by Air Canada include:

Air Canada is Canada's largest airline, the country's flag carrier and a founding member of Star Alliance, the world's most comprehensive air transportation network. Air Canada provides scheduled passenger service directly to 51 airports in Canada, 51 in the United States and 88 internationally. It holds a Four-Star ranking from Skytrax. Air Canada's Aeroplan program is Canada's premier travel loyalty program, where members can earn or redeem points on the world's largest airline partner network of 45 airlines, plus through an extensive range of merchandise, hotel and car rental rewards. Its freight division, Air Canada Cargo, provides air freight lift and connectivity to hundreds of destinations across six continents using Air Canada's passenger flights and cargo-only flights with its fleet of Boeing 767-300 freighters. Air Canada has committed to a net zero emissions goal from all global operations by 2050.